Smiling without feeling on the first mobile call. 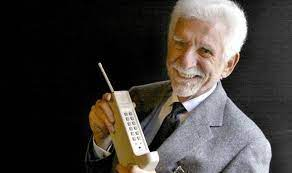 You would have thought that the first call made on a mobile phone would have been a cause for celebration. How many of us have rushed out to get a new phone by using King Communications and looking for a Vodafone near me. The joyful call made to friends and family to say you’ve got a new one is wonderful. It wasn’t that way for Mr Joel Engel. The phone call that he received on his landline was not one he was wanting to hear. Especially as it was coming from Mr Martin Cooper and it was on a mobile phone, or cellular as they call them in the USA.

Mr Martin Cooper was a very happy man because he worked for  AT&T and Mr Joel Engel worked for Bell laboratories, a rival firm. Both were trying to develop the first mobile phone and Martin Cooper’s team did it. The thing was the size of a show box and the battery lasted about an hour. However, crucially, it worked and Engel’s didn’t.

What did they talk about? Martin Cooper remembers saying “Hello Joel, I’m ringing you from a cellular phone”. Joel Engels doesn’t remember saying anything. No doubt he was trying to hide his crushing sense of disappointment and debating who he should fire first, the team that had failed to make a phone call or the receptionist for putting Martin Cooper through to him in the first place.