Offices of the past

Currently, offices are packed full of computer technology, where conferences can happen at the touch of a button with others from across the world as a result of the internet. Of course, the office once consisted of a simple chair and a desk with a typewriter, pen and paper. Office administration is evolving and the surroundings must adapt to suit the changing needs of those who work inside them. 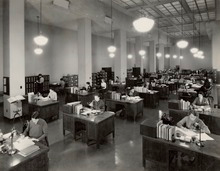 Hundreds of years ago, the nation’s admin was dealt with by the Chancery. Laws were written by hand and hundreds of pigeonholes would be used to store the parchments. It must have taken a lot of time and organization. Thankfully, today’s offices are much more comfortable. If you’re looking for Operator Chairs, visit a site like https://www.bestbuy-officechairs.co.uk/office-chairs/operator-chairs/

During the Industrial Revolution, because of the rapid growth, the first office spaces began to appear. The first designated office building in Britain was built in 1726. It was a three-level brick building called the ‘Old Admiralty’. The 1700s and 1800s witnessed a lot of booming industries, such as, railways, petroleum, retail and banking. Offices came into their own. In 1729, one of the first built offices was the London office for the famous East India Company.

Steel and iron were now used in construction, which meant building taller and bigger than ever. The Brunswick building was a purpose-built office block that was created in 1841. Lift were invented in 1852, making it easier to navigate the ever-growing buildings. So, offices as we recognise them today began during the Middle Ages but evolved quickly and significantly during the Industrial Revolution.